Palermo, Sicily, The Amalfi Coast, The ruins of Pompeii, and the Valley of The Temples. It’s all yours when you join Jeanne this coming March for her adventure to Sicily and Italy. Join Jeanne in exploring the hidden treasures of Southern Italy and Sicily. We’ll enjoy breathtaking scenery, historic cities, centuries-old villages, spectacular vistas and amazing Italian cuisine.

We’ll start our journey in Palermo and visit the squares of Quattro Canti, Piazza Bellini, and Piazza Pretoria. We’ll marvel at the architecture a blend of Moorish, Norman, and Spanish Baroque that makes this city so memorable.  We’ll also visit the town of Monreale with its 12th century cathedral, dazzling marble interior, mosaics, paintings, and cloisters. We’ll start in the town of Agrigento at Sicily’s most enthralling historical site, the Valley of The Temple.

Sicily is an amateur archaeologist’s dream.

“The earliest archaeological evidence of human activity on the island dates from as early as 12,000 BC. By around 750 BC, Sicily had three Phoenician and a dozen Greek colonies and, for the next 600 years, it was the site of the Sicilian Wars and the Punic Wars. After the fall of the Roman Empire in the 5th century AD, Sicily was ruled during the Early Middle Ages by the Vandals, the Ostrogoths, the Byzantine Empire, and the Emirate of Sicily. The Norman conquest of southern Italy led to the creation of the Kingdom of Sicily, which was subsequently ruled by the Hohenstaufen, the Capetian House of Anjou, Spain, the House of Habsburg,[6] It was finally unified under the House of Bourbon with the Kingdom of Naples as the Kingdom of the Two Sicilies. It became part of Italy in 1860 following the Expedition of the Thousand, a revolt led by Giuseppe Garibaldi during the Italian unification, and a plebiscite. Sicily was given special status as an autonomous region after the Italian constitutional referendum of 1946.
Sicily has a rich and unique culture, especially with regard to the arts, music, literature, cuisine, and architecture. It is also home to important archaeological and ancient sites, such as the Necropolis of Pantalica, the Valley of the Temples, and Selinunte.” ~ Wikipedia

While in Sicily, you’ll have the option of visiting the  World War Two Museum of the Allied Landing. 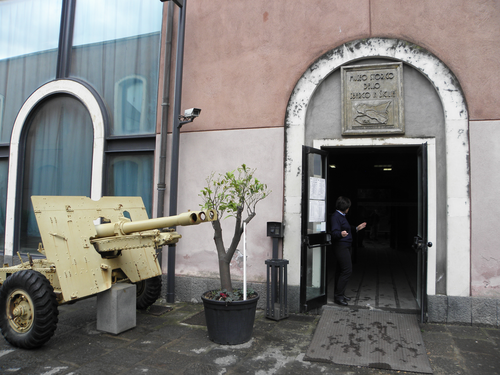 After our visit to Sicily, we’ll take the ferry to Villa San Giovanni on Italy’s mainland. We’ll travel through the unspoiled region of Calabria and into the Basilicata region where we’ll visit a local winery then linger over a spectacular dinner in the winery’s own restaurant.

Our final days in Italy we’ll visit the Sorrento Coast and the spectacular town of Amalfi. We’ll see this gem up close and personal and be able to take all the gorgeous photos we want.

Of course our adventure will be filled with great food, splendid Italian pastries, and their famous coffee.

Are you ready to book this Italian Adventure with Jeanne?